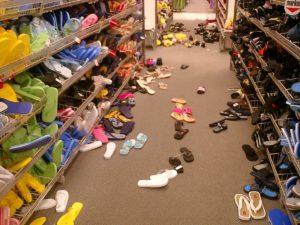 This photo isn’t even from Wal-Mart but I would say it sums up my experience.

Last week Sierra mentioned that her shoes were tight.  Sure enough her toes could probably pop out the front if there wasn’t some sturdy leather in place.

Sunday morning I packed up Ezra and Sierra to head out to Wal-Mart since I didn’t have luxury of checking out second hand stores for some shoes on a Sunday.  Speaking about luxury, I would like to say that I truly, truly, truly appreciate how Maureen has hooked me up with three years of shoes before this point and I had never had to go shoe shopping before.  Thank you!

But the day finally came that we had to enter into this new world and so with the two kids we headed to the shoe aisle.

Now, this post isn’t going to focus on a constantly crying Ezra or a Sierra who promised to behave but then realized that trying on shoes is a fools’ errand and she wanted to run around instead of help take care of her brother.

Out of 1000 pairs of shoes I think I stumbled upon two pairs of Size 10 and to this day, I still haven’t found the elusive Size 11.  The size 10 we tried on were some high tech light up ones that I swore were probably overpriced so I balked at getting those.

Of course I made the ultimate mistake in actually telling Sierra we were going to get new shoes so when we left without any it was the end of her world.

Seriously Wal-Mart…are you like this in every store?  After speaking with some colleagues, it seems like the answer is a resounding ‘yes’.

I never will go buy shoes at Wal-Mart again.  It’s chaos.  It was well worth it to walk into a Carter’s see their shoes hanging up according to size and bingo bango, I paid $5 more then I would at Wal-Mart and walked out of there in fifteen minutes.  I wasted a lot more of that in terms of time spent looking for that elusive size 11.

Wal-Mart, I love you.  Heck, I used to work for you.  I will always argue in your favour.  But not when it comes to your kids shoe aisle. 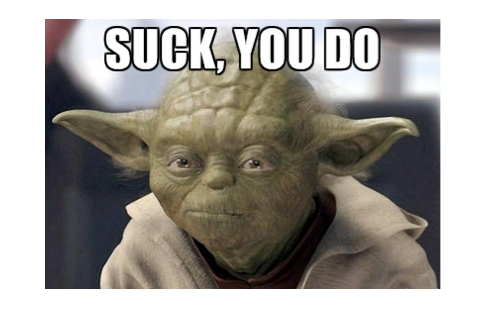